The Case for Abolishing the Tax Increment Financing (TIF) Program

In October 2019, nine striking CTU members were arrested for blocking the entrance to the Sterling Bay offices, the developers who are on track to receive $1.3 billion in Tax Increment Financing dollars to construct 6,000 homes at the future Lincoln Yards development. Lincoln Yards will create a city-within-a-city for affluent residents with new school and transit facilities and an urban playground including kayak docks, sports fields, and a new connector to the 606 Trail. Around the same time, the city also approved a second TIF district for The 78 development in the South Loop to make $700 million infrastructure upgrades for the new 10,000 luxury residential units going up.

Targeting Sterling Bay, the teacher-activists highlighted how the city does not lack money for the schools. Rather, city officials seem to always find millions of dollars to handout to luxury real estate developers while crying poor when it comes to providing all Chicago children with the schools they deserve.

Following the lead of the CTU rank-and-file, 33rd Ward Working Families wants the city to prioritize development and services for all Chicagoans, not just the affluent few. The first step we can take toward this goal is to abolish the Tax Increment Financing program.

The theory behind the TIF rests on the assumption that development today will likely increase a city’s property tax base in the future, therefore the city should use these anticipated increases in property tax revenues to fund renewal in advance.

A TIF district creates a development fund for a specific geographic area based on the property taxes generated within that TIF district. Once a TIF district is formed, all the properties in that TIF district have their baseline property value amount on which taxing jurisdictions draw their revenues, or Equalized Assessed Value (EAV), frozen for 23 years. When EAVs are frozen, any taxing jurisdiction (like the Chicago Public Schools, City of Chicago, Community Colleges, etc.) receiving property taxes is only allowed to tax on the baseline EAV for the 23 year TIF duration. (2)

Any property value growth resulting in new tax revenue above the baseline EAV is considered ‘the increment’ of property tax growth that is captured by TIF development accounts. 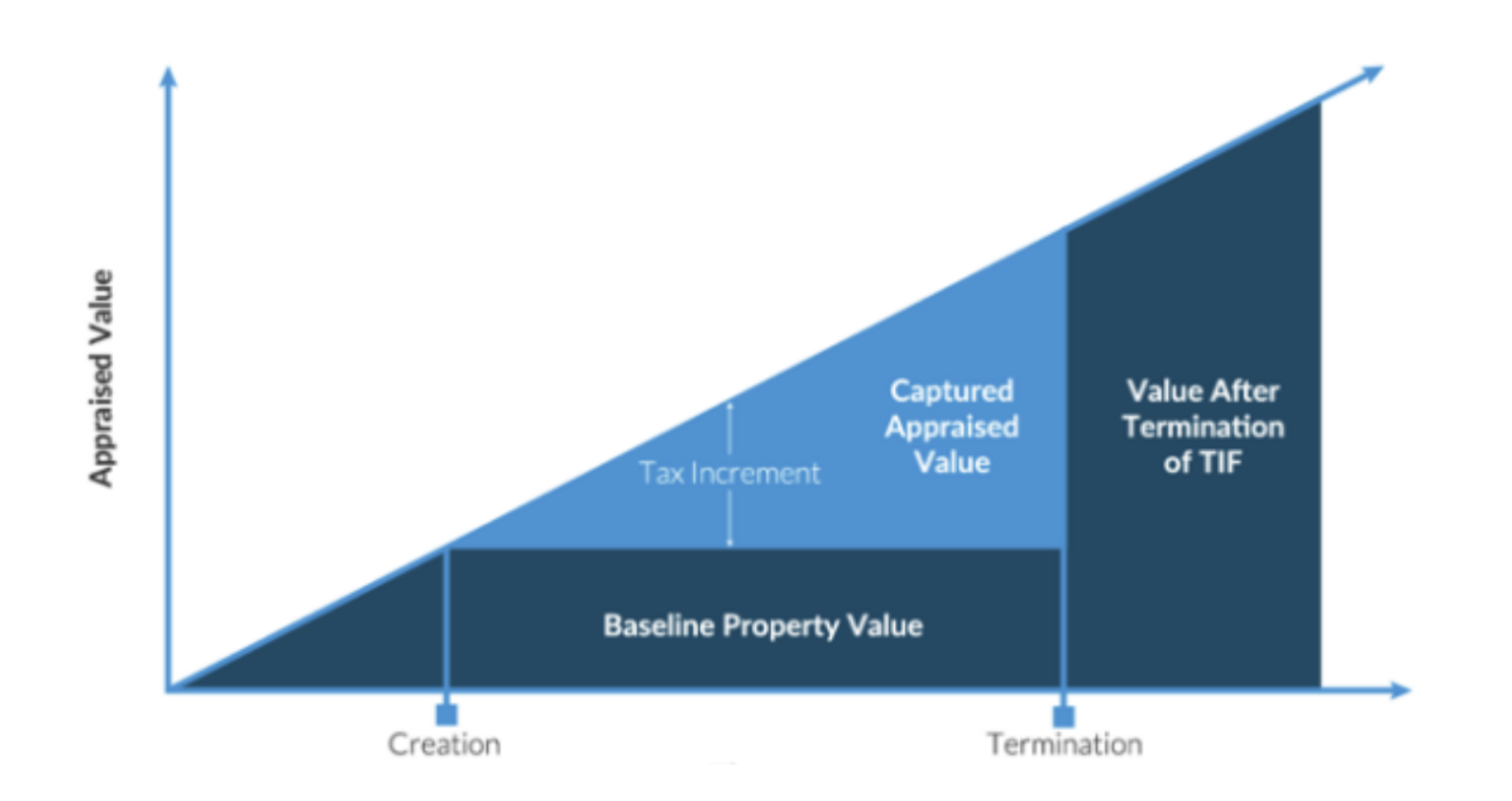 To illustrate how TIFs work, imagine Luis owns a warehouse in a newly formed TIF district. The Equalized Assessed Value of Luis’ warehouse at the time the district was formed was established at $100,000. The warehouse’s EAV is frozen at $100,000 for the 23 year life span of the new TIF district. Let’s say that over the next 10 years, the property value of the warehouse increases to $125,000. The $25,000 above Luis’ EAV is considered the increment of property value growth on which only the TIF fund can tax.

The municipality imposes its full tax levy on that $125,000 but only gives the taxing jurisdictions revenues based on the frozen EAV of $100,000. The property tax revenues generated from the $25,000 increment go into the local TIF development fund. This is how incremental growth is captured and accumulated in a TIF account.

Impact of TIF on School Finances and Taxpayers

TIF districting in Chicago is substantial; Chicago’s 138 TIF districts cover approximately 1/3 of the city’s land mass and 40% of its property tax base - locking future revenues from property value growth in the TIF district. TIF districts themselves do not directly take money away from the schools and other city agencies. Rather, city agencies are forced to raise their property tax rates to fund their services. For example, the amount of revenues Chicago Public Schools can raise to fund schools is called their tax levy. CPS is limited by state law, the Property Tax Extension Limitation Law (PTELL) in 1994, from raising its tax levy above a certain limit, or tax cap. (3)

Because the tax cap determines CPS’ tax levy, the amount of taxes CPS can levy to fund schools does not change with the formation of TIF districts. Instead, by preventing the schools and other city agencies from taxing on property tax growth in TIF districts, TIF districts forces city taxing bodies to charge all Chicago residents a higher property tax rate to reach their levy to fund city services, or cut services to compensate for the property values they are unable to tax. In other words, all Chicagoans have to pay for the TIFs with higher property taxes to fund city agencies. Former Cook County Commissioner and current Congressman Mike Quigley estimated that the average Chicago tax bill is 10% higher than it would be if not for TIFs. (4)

The process in which TIF districts are formed and how funds are doled out lacks transparency and minimizes public oversight, largely because TIF budgeting works outside traditional budgeting practices. Normally when the mayor’s office proposes the city’s budget, it releases the budget to the City Council, public, and media for scrutiny and comment before it is voted on by the City Council. In contrast, TIF accounts are held in the mayor’s office effectively as an off-the-books slush fund that the mayor and aldermen can use to fund pet projects with little oversight.

Because TIF funds are not directly tied to specific projects or city development plans, surplus funds can accumulate in TIF accounts. Surplus TIF funds are not tied to specific projects but rather form a slush fund that can reward well-connected real estate developers. TIF slush funds violate state law, that says at the end of the year, any balance in a TIF district not earmarked for future projects should be declared surplus and returned to the overlapping taxing bodies. Activists have successfully forced the city to return surpluses to the
taxing bodies.

The distribution of TIF funded projects is highly unequal, first and foremost benefiting wealthier parts of Chicago’s Central Area (composed of the downtown, wealthy North Side neighborhoods and surrounding gentrifying belt). Over half of the $5 billion in TIF redevelopment funds collected since 1984 have been spent in the Central Area including: paying the moving expenses for or rehabbing corporate offices; constructing luxury residential developments, entertainment and shopping venues; and rehabbing chain hotels catering to tourists and business travelers. For example, the city offered Boeing $56 million in TIF funds as an enticement to move their headquarters from Seattle to the West Loop, at a time
when the company cleared $4 billion in profits.

The city justifies TIF corporate handouts by claiming it will lead to job creation. However, affluent suburbanites are the primary beneficiaries of TIF job creation. A report issued by The Grassroots Collaborative found of the 52,400 jobs created in downtown between 2002-2011, only one in four went to a Chicago resident. (5) The lion’s share of those jobs went to suburbanites who do not contribute to the property tax base and therefore don’t pay into TIF accounts.

When TIF dollars are invested back into the district, small TIF accounts can only fund small projects, while larger pots of TIF money can finance larger projects. For example, the South Loop TIF district used its $187 million in TIF funds to finance a new train station, school upgrades, and a new sports arena in the neighborhood. Meanwhile the lower income West Woodlawn TIF district could only scrimp $1.3 million together for basic street light repairs. The widening development gap between the dense network of development projects popping up in the South Loop and low cost basic maintenance repairs of existing infrastructure in neighborhoods outside the Central Area exemplifies how TIF not only reproduces inequality, but it deepens unequal neighborhood development.

Poor neighborhoods, like investment-starved Englewood on the South Side whose TIF district generated $22 million in the 2000s, are effectively cut off from sharing in the nearly $2 billion in  TIF revenues generated by the TIF districts formed in the Loop. (7)

Research shows subsidies for housing tend to be overwhelmingly used to subsidize luxury housing for the rich. (8) High end development tends to put upward pressures on rents across the board. TIF subsidies for affluent housing lead to higher rents for working class and poor people. Higher rents function as a transfer of wealth from working and poor people to landlords. Also, TIF funded improvements in gentrifying neighborhoods that are intended to attract future, more affluent residents often mean that renters, via their rents, are paying property taxes into TIF funds that finance improvements that ultimately lead to their displacement.

The city mobilizes the TIF program to fund public works projects that support gentrification. For example, they gentrified the public school system by expanding the number of selective enrollment and gifted schools, disproportionately located in the North Side and Central Area. Chicago Public Schools devoted a 1/3 of all TIF revenues spent on school construction projects on these exclusive schools even though they compose less than 1% of all CPS schools. (9)

And despite the need for system-wide transit station upgrades, 90% of CTA new or rehabilitated train stations, track repairs, and bus rapid transit
construction projects funded with TIF dollars are in the North and Central Areas. (10)

TIF Surplus Ordinance Will Not End Inequality Caused by TIF

However, since the nature of the TIF actively produces class and race inequality, we argue that the TIF program needs to be abolished, not merely reformed.

First, the mayor can factor in the surplus when drafting city budgets. In this case TIF surpluses will not provide an additional increment of revenue to the taxing bodies but rather, will free up revenues to be shifted to other parts of the budget. This is exactly what Mayor Lori Lightfoot did during the 2019 Chicago Teachers Union strike. She declared a TIF surplus that returned $163 million back to the schools, only to hit Chicago Public Schools with a $60 million bill to cover pension contributions for non-teacher CPS employees made by City Hall.

Second, property taxes (the source of TIF revenues) are the most regressive way to fund city services because working and middle-class homeowners have a greater share of their income invested in their homes relative to wealthy families. TIF surpluses give the city a way to cover deficits with a regressive revenue source, instead of making the rich and corporations pay their fair share through a progressive tax system. Additionally, returning surpluses to the taxing bodies does not fix the fundamental problem of how the TIF program creates and reproduces inequality in the first place. We need to finance city services in a fair and progressive way, and build these changes into the system.

WE NEED TO ABOLISH THE TIF PROGRAM ALTOGETHER.

In order to end tax handouts to the rich, stop runaway wealth inequality, and dismantle institutional racism, we need to abolish the TIF
program. The city should stop forming TIF districts. For existing TIF districts, TIF revenue can finance earmarked projects. But once projects are completed, TIF districts should be dissolved, and any surplus should be returned to the taxing bodies.

A more equitable way of financing urban development would entail collecting progressive tax revenues from all Chicagoans and depositing those revenues into a single pot of money dedicated to neighborhood development. Every neighborhood would be able to share in the wealth by dipping into the pot for development dollars that can be allocated to affordable housing, public infrastructure projects, or attracting well-paying working class jobs. The city could use its share of the surplus from dissolved TIF districts to seed the neighborhood development fund.

Each ward should form a CPZB. The CPZB would establish community participatory democratic control over how aldermanic offices prioritize and fund neighborhood development projects.