33rd Ward Working Families members have voted to make three 2022 endorsements to candidates whose district includes all or some of our ward:

🗺️ See the map of Delia's, Cristina's, and Anthony's districts

Our members have also voted to make one solidarity endorsement to a candidate outside our ward: 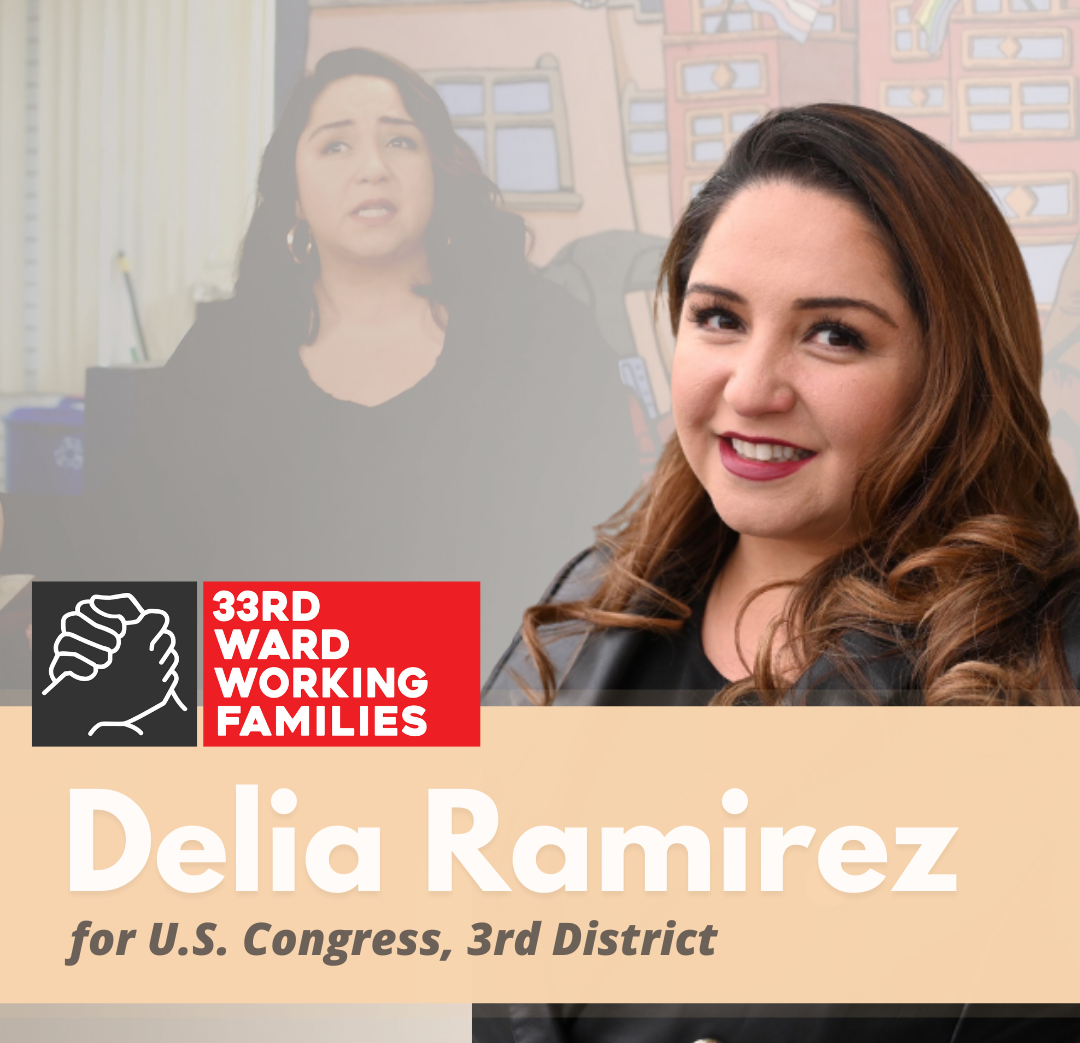 We’re proud to be able to announce our support for our friend State Rep. Delia Ramirez in the IL-3 primary.

The newly created 3rd congressional district includes our ward and will be our new representation in the United States House of Representatives.

We believe we should make the most of this opportunity and send a strong, progressive fighter who will be an outstanding advocate for our district and our values.

As the daughter of Guatemalan immigrant parents, Delia is rooted in the values of service, community, and perseverance.

In Springfield, Delia has taken on the status quo and served as a vocal champion for youth and families, renters, and public schools. She’s been one of our strong allies in the state house and has given our movements a seat at the table.

In Washington, Delia would be a member of the House Progressive Caucus who would fight for our district’s working people and push for desperately needed federal programs such as a Green New Deal and Medicare for All.

She’s not accepting money from real estate developers, fossil fuel companies, or the NRA, so we’ll need to come through to help get her to D.C. We’ll be excited to share upcoming opportunities to help support the Delia for Congress campaign in the coming months. 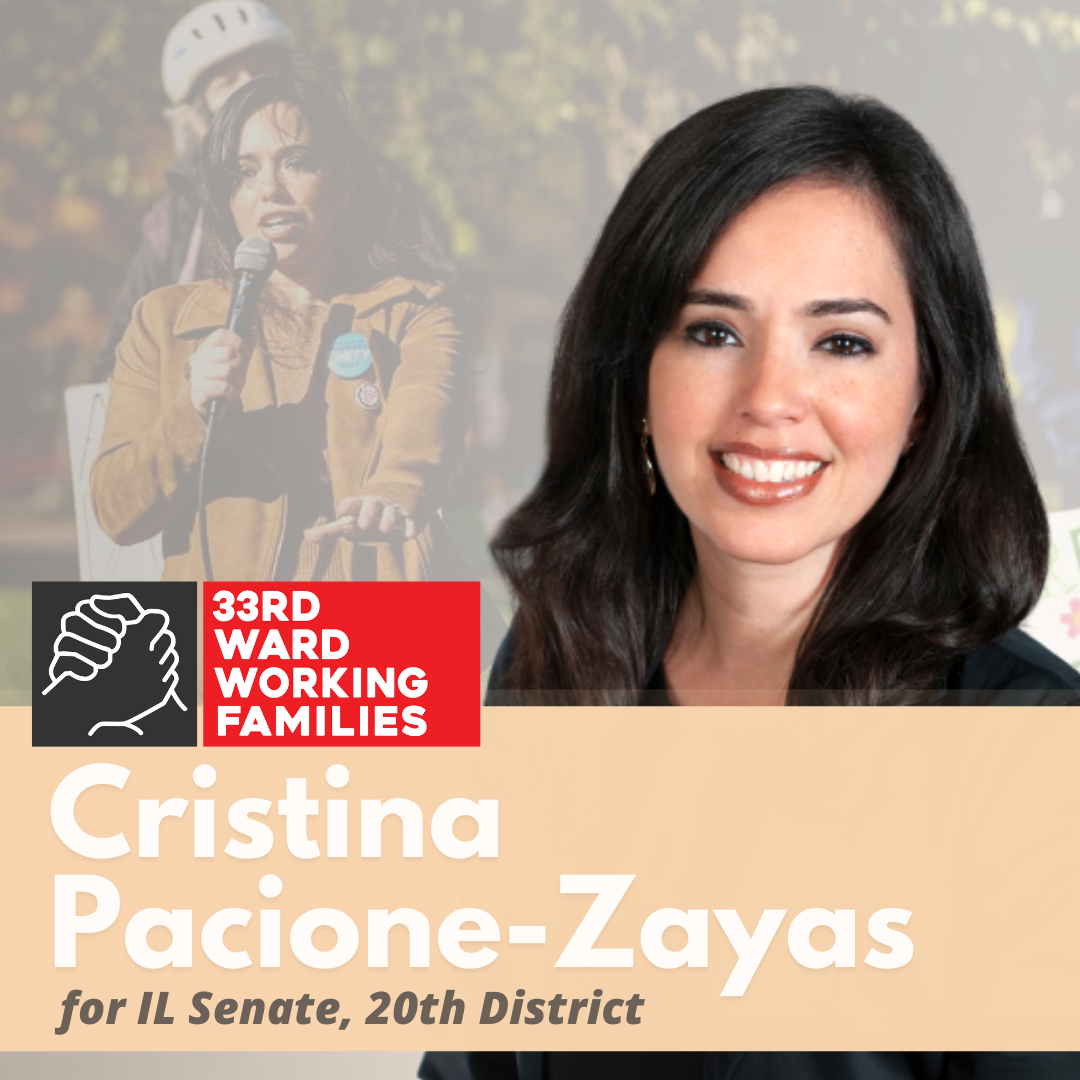 Now more than ever, we need strong progressive advocates fighting for our families at all levels of government.

As a mother of two public school students and the daughter of community organizers who met at the Logan Square Boys and Girls Club, State Sen. Cristina Pacione-Zayas has made support of children and families a hallmark of her first term in office.

As a freshman state senator, Cristina was chief sponsor to bills establishing more funding for childhood education and providing tele-health access for parents of infants and toddlers with disabilities. Further sponsorships included bills to provide zero- and low-interest loans for Northwest Side families at risk of losing their homes, and to establish first-in-the-nation state cultural districts to protect historic and unique communities from the effects of gentrification and displacement.

Cristina would return to Springfield to continue work on expanding healthcare access and affordable housing, addressing the needs of our Latinx and immigrant communities, transitioning Illinois to renewable energy, and supporting holistic violence prevention strategies to target the root causes of violence and foster healthy neighborhoods.

We’re happy to have Cristina with us advocating for these important issues and look forward to sending her back to our state capitol for a second term! 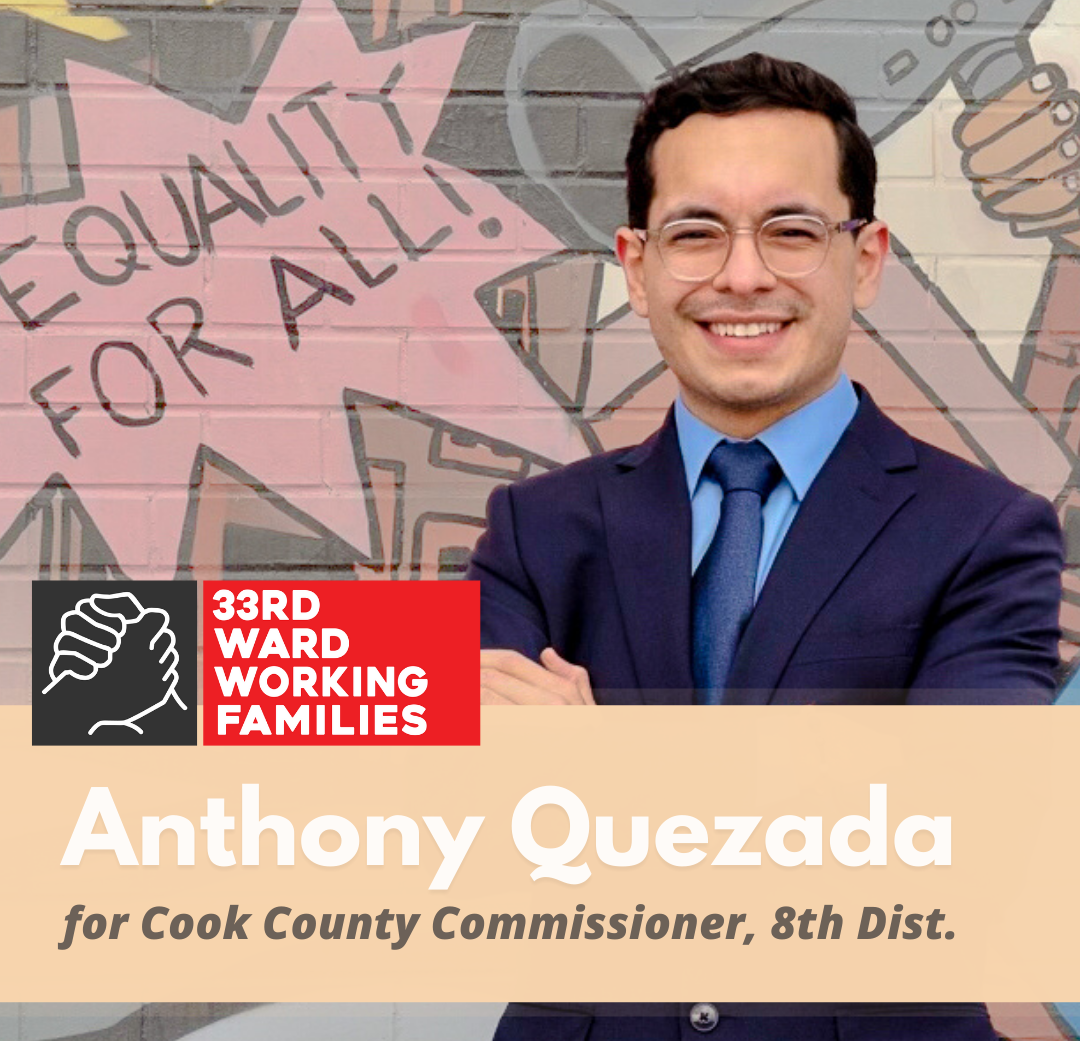 We’re excited to announce our endorsement for our friend Anthony Joel Quezada for 8th District Commissioner.

Anthony is a home-grown activist and advocate who was raised in Logan Square. He’s the son of a father from Mexico who worked as a sous-chef and a mother from Costa Rica who worked multiple jobs to support their family.

Anthony has been a champion of immigrants rights, labor, and the environment with our neighboring ward organization, United Neighbors of the 35th Ward. He was a driving force behind the Emmett Street apartments, a 100-unit, 100% affordable, transit-adjacent building to push back against the spiraling rent costs in Logan Square. Anthony was an active Bernie Sanders supporter who won his race for 35th Ward Democratic committeeman in 2020.

When 33rd Ward Working Families has needed help to build our progressive movement on the Northwest Side, Anthony has been one of our most reliable and committed allies.

We’re delighted at the chance to elect him to represent us at the county level.

As our next Cook County Commissioner, Anthony will work to fully fund our Cook County hospitals, protect our environment and create green jobs, and advocate for our community’s youth, LGBTQ folks, and working-class families.

We look forward to sharing opportunities to get involved and help support him now through the June 28 election!